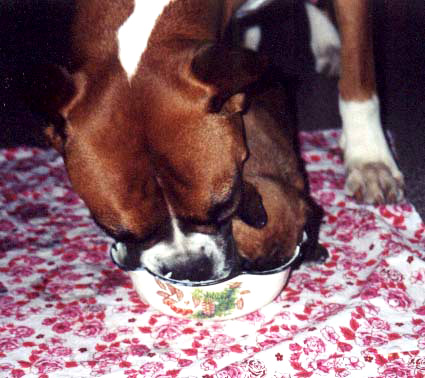 Dog owners are too often misled by a number of generally accepted ideas that have been handed down through the years. The following paragraphs should set the record straight.
A dog should fast once a week.
This may be convenient for the owner, but has nothing to do with the dog’s health.
A fasting dog works better.
This idea persists in certain circles, although it is now widely recognized that for endurance activities (hunting, sledding), it is much better to feed a light meal at least two hours before the activity begins.
My dog eats what I eat.
Many owners anthropomorphize their dogs. They don’t know, or they pretend not to know, that dogs have different dietary habits than humans. Dogs are carnivores, although not strict carnivores; they are not omnivores. They digest high-quality vegetable proteins as well as animal proteins, but can also assimilate large quantities of fat, unlike humans. Dogs tolerate starch as an energy source only if it is completely cooked, and in a proportion that takes their physiological limitations into account. A dog’s vitamin and mineral needs are also very different from those of its owner (a puppy, for example, needs 400% less vitamin D than a human baby).
A dog needs a varied diet.
Ideally, a dog will eat the same food from the same dish every day at the same time and place exactly the opposite of what its owner would enjoy! In fact, changing the food too frequently changes the habits that contribute to the dog’s well-being, as well as exposing it to digestive problems. The intestinal microflora is adapted to a specific type of food, and sudden changes do not allow these “targeted” microorganisms enough time to adapt to the new food. This can result in increased production of certain poorly-tolerated metabolites or toxins. For example, adding meat of indifferent quality to the diet increases the action of proteolytic microbes, which causes an alkaline pH, leading to flatulence and diarrhea of varying severity. Thus, variety in a dog’s diet is tolerated only within a range of foods that are similar in composition. Otherwise, when changing foods, the change should be implemented gradually over a period of one week.
Complete foods should be supplemented with meat.
Many breeders and owners are nervous when they cannot identify the meat used in a commercial complete food. Although some brands try to remedy this by adding “with chicken,” “with beef,” or “with lamb” to their labels, it is still difficult for the owner to concede that these really are the main ingredient in the formulation, and are often of better quality than the “meat for animals” bought at the butcher’s. Note that, since complete dry foods sold as kibble have been studied and formulated to be nutritionally balanced for particular physiological conditions (growth, breeding, sport activities) or sizes of dog (small, medium, or large), any addition will unbalance the diet and negatively affect the dog’s health.
Proteins overwork the kidneys.
Incorrect application of results from research studies on rats has led to the completely erroneous but widespread idea that, with time, high levels of dietary proteins can lead to premature aging of the kidneys and the loss of their purifying function, leading to chronic kidney failure. Studies on this point have been conducted in France since 1975 (Paquin and Pibot, in collaboration with the École Vétérinaire in Alfort and the Royal Canin Company, published in 1979 and 1986), and in the United States over the last 15 years (Churchill, in collaboration with the Hill’s Company, published in 1997), and have now made it abundantly clear that this statement is false, although very persistent in some minds. In fact, the urea produced by protein catabolism is eliminated passively by the kidney, and if the kidney loses its function, it is either simply as the normal result of aging, or as the result of a specific or intercurrent disease. An early and drastic restriction of the protein content of the food, as advocated by some, will only weaken the dog’s immune system, and thus the whole dog. Since 1997, the scientific world has been unanimous on this point: dietary protein has no ill effects on the kidneys.
Calcium makes a puppy’s ears stand up.
In dogs with prick ears (in particular the German Shepherd), drooping ears and a slight change of stance can be observed between the ages of four and six months, when the milk teeth fall out. At that moment, the owner often hurries to supply nutritional supplements rich in calcium and vitamins, and then notices that things return to normal in a few weeks. In fact, the calcium and extra vitamins have no effect, since the ears are composed of cartilage, which of course does not fix calcium or it would turn into bone. No scientific data have ever shown that diet affects the position of the ears, and this practice can only harm the puppy when it throws the diet out of balance.
All the vitamins are in the vegetables.
Vegetables are not the only source of vitamins for a dog. In fact, the fat-soluble vitamins (A, D, E, and K) are stored in animal fat or certain storage organs. The liver, for example, contains a great deal of vitamin A-so much, in fact, that it would be dangerous for a dog to eat liver every day. Water-soluble vitamins (B complex) occur in both animal and vegetable matter. There is as much vitamin B1 in powdered milk as there is in green beans. In any case, prepared foods contain vitamins added separately to balance the food. The dehydrated vegetables found in certain dry foods with multiple ingredients are never a significant source of vitamins.
Vitamin D needs to be added to puppy food.
Puppies require relatively little vitamin D, so their needs can easily be met by a balanced food. Vitamin D overdose caused by unnecessary or excessive nutritional supplementation can in fact be dangerous and cause serious bone problems.

Nutrition of the Old Dog