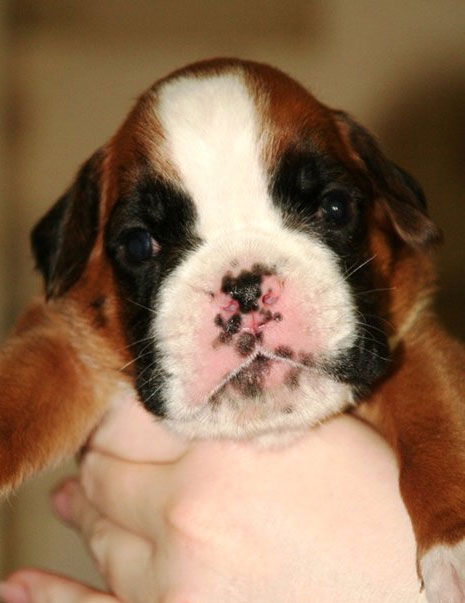 The Boxer is a breed of stocky, medium-sized, short-haired dogs developed in Germany. Their coat is smooth and tight-fitting; colors are fawn or brindled, with or without white markings, which may cover the entire body, and white. Boxers are brachycephalic (they have broad, short skulls), have a square muzzle, mandibular prognathism (an underbite), very strong jaws, and a powerful bite ideal for hanging on to large prey. The Boxer was bred from the Old English Bulldog and the now extinct Bullenbeisser, and is part of the Molosser group. The Boxer is a member of the Working Group. Boxers were first exhibited in a dog show for St. Bernards in Munich in 1895, the first Boxer club being founded the next year.
One of the breed’s most notable characteristics is its desire for human affection, especially from children. They are patient and spirited with children, but also protective, making them a popular choice for families. The Boxer requires little grooming, but needs daily exercise.

He is the clown of the dog fraternity, canines answer to vaudeville. A laugh a minute, lives life to the fullest, a maximum velocity version of canine slapstick. But he is also a sympathetic soul, a shoulder to cry on, a confidante. He is all that is good in a dog. He is of course The Boxer (from the article Canine Clowns by Matthew Cowley)