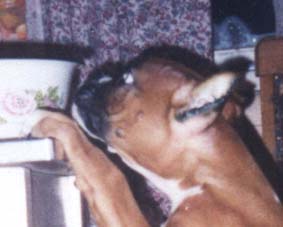 The color of the food doubtless makes more of an impression on the owner than on the dog. (The same is true of kibbles shaped like bits of meat or tiny vegetables.) The odor of the food, however, is an entirely different story. Everyone has seen a dog sniff its dish before gobbling down the contents. It is common knowledge that a dog’s sense of smell is much more developed than a human’s (on the order of a thousand times more sensitive), so it is not surprising that odor plays a key role in the choice of food. Even a slight blockage of the nasal passages (if the dog has a cold, for example) will markedly reduce food consumption.

Two Practical Examples Show the Influence of Smell on the Dog’s Eating Habits:
– A bitch’s diet affects the olfactory preferences of her puppies. In fact, certain tastes from the bitch’s food find their way into her milk and influence the puppies’ later taste preferences. Beginning at the age of four days, puppies’ olfactory imprinting is also affected by odors from the dog dish, and later, the puppies spontaneously prefer foods having similar odors. Thus, puppies can be conditioned from a very early age to like the food they will eat once they are weaned.
– When a dog temporarily refuses a food, which sometimes happens with dry food, addition of warm water will improve the flavor. Warm water thus becomes a simple, economical, and effective “condiment”.
– When a dog chews (which it barely does at all) and swallows, it blocks respiration, and so cannot smell the food a second time. So as soon as a food is in the mouth, only the taste, texture, and temperature count. Dogs seem to sense the same four basic tastes (sour, bitter, salty, sweet) as humans, but since their sense of smell is so much better, they naturally enlist the aid of their taste buds in smelling. So a dog sniffs, tastes, and then swallows. This is a good time to point out that a dog can remember more than 4,000 different odors.