First to third weeks of life: Shortly after birth, the puppies are defenseless, at the mercy of a host of pathogens. For this reason, their mother’s milk is of enormous importance for the newborns. Along with it, a puppy ingests vital antibodies. In addition, this so-called colostrum also has a mildly laxative effect. The puppy drinks and immediately thereafter empties its bowel. The mother helps this process along by licking the puppy. As she does so, she consumes the waste matter, just as she did after the puppy was born.

boxer mom and her puppies

The puppy’s eyes remain closed for about the first 10 days, and the ears, for the first 12 days.

When the puppies reach three weeks of age, they should receive their first deworming treatment. 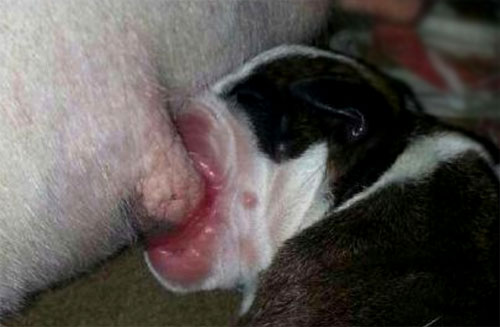 Important: At this time, it is essential to spend a lot of time playing with your puppies. It is through hand contact that they sense their special person and imprint on him or her.

What Is the Best Age to Send Puppies to Their New Homes?

Eighth week of life: The most opportune time for the puppies to go to new homes is two months after their birth, at the beginning of the socialization phase.

Pointer: Before being handed over to their buyers, the puppies first should have been wormed a second time and given their first series of vaccinations.

Weight check: The daily weighing of the puppies should be a matter of course for you.

In this way you can immediately detect developmental disturbances in individual animals, because they can be read from insufficient weight gain. If the entire litter is not gaining weight normally, however, the fault lies with the mother dog. If she has no organic defects, you, as the breeder, have to give the puppies extra food in this case. Sometimes that may be necessary as early as the third week after birth.

♬ Inside Their Head – TT remix

♬ Get You The Moon – Kina

The dog’s birth and first contacts