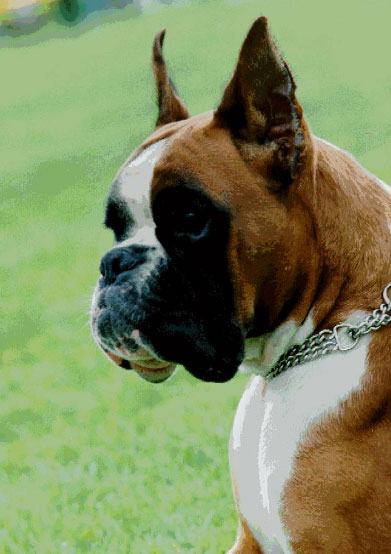 BRIEF HISTORICAL SUMMARY : The small, so called Brabant Bullenbeisser is regarded as the immediate ancestor of the Boxer. In the past, the breeding of these Bullenbeissers was in the hands of the huntsmen, whom they assisted during the hunt. Their task was to seize the game put up by the hounds and hold it firmly until the huntsman arrived and put an end to the prey. For this job the dog had to have jaws as wide as possible with widely spaced teeth, in order to bite firmly and hold on tightly. A Bullenbeisser which had these characteristics was best suited to this job and was used for breeding. Previously, only the ability to work and utilization were considered. Selective breeding was carried out which produced a dog with a wide muzzle and an upturned nose.

GENERAL APPEARANCE : The Boxer is a medium sized, smooth coated, sturdy dog of compact, square build and strong bone. His muscles are taut, strongly developed and moulded in appearance.
His movement is lively, powerful with noble bearing. The Boxer must be neither cumbersome nor heavy, nor light or lacking in body substance.

IMPORTANT PROPORTIONS :
a) Length of body / Height at withers : Square build, which means that the horizontal line of the back is perpendicular to the vertical line passing through the point of shoulder and to the other vertical line passing through the point of buttock, thus defining a square outline.
b) Depth of brisket / Height at withers : The chest reaches to the elbows. Depth of chest is half the height at withers.
c) Length of nose bridge / Length of head : Length of nose bridge in relation to skull should be 1 : 2 (measured respectively from tip of nose to inner corner of eye and from inner corner of eye to occiput).

BEHAVIOUR / TEMPERAMENT : The Boxer should be fearless self-confident, calm and equable. Temperament is of the utmost importance and requires careful attention. Devotion and loyalty towards his master and his entire household, his watchfulness and self-assured courage as a defender are famous. He is harmless with his family but distrustful of strangers. Happy and friendly in play, yet fearless in a serious situation. Easy to train on account of his willingness to obey, his pluck and courage, natural keenness and scent capability. Undemanding and clean, he is just as agreeable and appreciated in the family circle as he is as a guard, companion and working dog. His character is trustworthy, with no guile or cunning, even in old age.

HEAD : This gives the Boxer his characteristic look. Must be in good proportion to the body and appear neither too light nor too heavy. Muzzle should be as broad and powerful as possible. The harmony of the head depends on the balance between muzzle and skull.
From whichever direction the head is viewed, from front, above or sideways, the muzzle must always be in the right proportion to the skull i.e. it must never appear too small. It should be clean, not showing any wrinkle. However, natural folds are formed in the cranial region when alerted. From root of nose, folds are always indicated running in a downward direction on both sides. The dark mask is confined to the muzzle and must be in sharp contrast to the colour of the head so that the face does not appear sombre.

CRANIAL REGION :
Skull : The cranial region should be as lean and angular as possible. It is slightly arched, neither too round and short, nor flat; nor should it be too broad. Occiput not too pronounced. Furrow in forehead only slightly marked, must not be too deep, especially between the eyes.
Stop : The forehead forms a distinct stop with the bridge of nose. Bridge of nose must not be forced back into the forehead as in the Bulldog, nor should it be downfaced.

FACIAL REGION :
Nose : Nose is broad and black and only slightly turned up with wide nostrils. Tip of nose is placed slightly higher than root of nose.
Muzzle : The muzzle is powerfully developed in three dimensional volume, neither pointed nor narrow, nor short or shallow. Its appearance is influenced by :
a) Shape of jaw. b) Position of canine teeth. c) Shape of lips. The canines must be placed as far apart as possible and must be of good length, making the front of the muzzle broad, almost square and forming a blunt angle with bridge of nose.
In front, the edge of the upper lip rests on the edge of the lower lip. The part of the lower jaw with lower lip curved upwards, called the chin, must not markedly protrude over upper lip, seen from front. Nor should it be hidden by the upper lip but should be well defined from front and side.
The canines and incisors of the lower jaw must not be visible when mouth is closed, neither should the tongue show. Median groove in the upper lip (philtrum) is clearly visible.
Lips : The lips complete the shape of the muzzle. The upper lip is thick and padded and fills the space formed by the undershot lower jaw; it is supported by the lower canines.
Jaws/Teeth : The lower jaw protrudes beyond the upper jaw and is curved slightly upwards. The Boxer is undershot. The upper jaw is broad where it joins the cranial region, tapering only slightly towards the front. The teeth are strong and healthy. The incisors are as even as possible, set in a straight line. Canines wide apart and of good size.
Cheeks : Cheeks are developed in proportion with the strong jaws without markedly bulging. They merge with the muzzle in a slight curve.
Eyes : The dark eyes are neither too small nor protruding or deep set. Their expression conveys energy and intelligence and must not be threatening or piercing. Eye rims must be dark.
Ears : The natural ears are of appropriate size. They are set on wide apart on highest part of skull. In repose they lie close to the cheeks and turn forward with a definite crease, especially when the dog is alert.

NECK : Topline runs in an elegant arch from the clearly marked nape to the withers. It should be of ample length, round, strong and muscular.

BODY : Square body resting on sturdy, straight legs.
Withers : Should be marked.
Back : Including loin should be short, firm, straight, broad and muscular.
Croup : Slightly sloping, broad and only slightly arched. Pelvis should be long and broad, especially in bitches.
Chest : Deep, reaching to elbows. Depth of chest is half the height at withers. Well developed forechest. Ribs well sprung but not barrel-shaped, extending well to the rear.
Underline : Running towards rear in elegant curve. Short, taut flanks slightly tucked up.

TAIL : Set on high rather than low. The tail is of normal length and left natural.

FOREQUARTERS : Front legs, seen from front, must stand parallel and have strong bone.
Shoulders : Long and sloping, connected firmly to body. Should not be too loaded.
Upper arm : Long, making a right angle to shoulder blade.
Elbows : Neither too close to side of chest nor turned out.
Forearm : Vertical, long, lean and muscled.
Carpus (wrist) : Strong, well defined, but not exaggerated.
Metacarpus (Pastern) : Short, almost perpendicular to ground.
Front feet : Small, round, tight, well cushioned and hard pads.

HINDQUARTERS : Very muscular, the muscles brick hard and visible under the skin.
Hindlegs : Seen from rear : straight.
Thigh : Long and broad. Angles of hip and knee are open but as little as possible.
Knee (Stifle) : When dog is standing, should reach sufficiently forward so that it would touch a perpendicular line from point of hip to ground.
Lower thigh : Very muscular.
Hock : Strong and well defined but not exaggerated. Angle approximately 140 degrees.
Metatarsus (Rear Pastern) : Short with slight inclination, 95-100 degrees to the ground.
Hind feet : Slightly longer than front feet, tight; well cushioned and hard pads.

SKIN: Dry, elastic without any wrinkles.

COLOUR : Fawn or brindle : Fawn comes in various shades from light fawn to dark deer red but the most attractive shades are in the middle range (red fawn). Black mask. The brindle variety : fawn background of varying shades has dark or black stripes running parallel to ribs. Stripes must contrast distinctly to ground colour. White markings should not be discarded. They can be quite pleasant.

FAULTS : Any departure from the foregoing points should be considered a fault and the seriousness with which the fault should be regarded should be in exact proportion to its degree and its effect upon the health and welfare of the dog.
• Behaviour / Temperament : Lack of spirit.
• Head : Lack of nobility and typical expression, sombre face, Pinscher or Bulldog type head. Dribbling, showing of teeth or tongue. Muzzle too pointed or slight. Bridge of nose falling away. Leather or weather nose, pale nose leather. So called, “hawk eye”, lack of pigment in haw.
In uncropped ears : Flying, half erect or erect ears, rose ears.
Wry jaw, slanting teeth, incorrect position of teeth, poorly developed teeth and unsound teeth due to illness.
• Neck : Short, thick and throaty.
• Body : Front too broad or low to the ground. Sagging body, roach or sway back. Lean, long, narrow, sagging loin, loosely coupled body.
Arched loin, croup falling away. Narrow pelvis, hollow flanks, pendulous belly.
• Tail : Low set on, kink tail.
• Forequarters: French front, loose shoulders, loose elbows, weak pastern, hare foot, flat, splayed feet.
• Hindquarters : Weak muscles. Too much or too little angulation, down on hocks, barrel hocks, cow hocks, narrow hocks, dewclaws, hare foot, flat, splayed feet.
• Movement : Waddling, insufficient reach, pacing, stilted gait.
• Colour of coat : Mask extending beyond muzzle. Stripes (brindling) too close together or too sparse.
Sooty ground colour. Mingled colours. Unattractive white markings such as a entirely white head or white on one side of the head. Other colours and white markings exceeding one third of the ground colour.

Any dog clearly showing physical or behavioural abnormalities shall be disqualified. 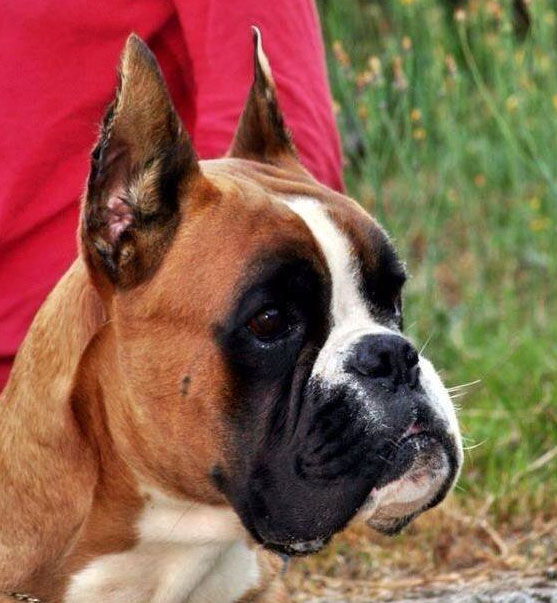